After the War he married my grandmother and had Five children 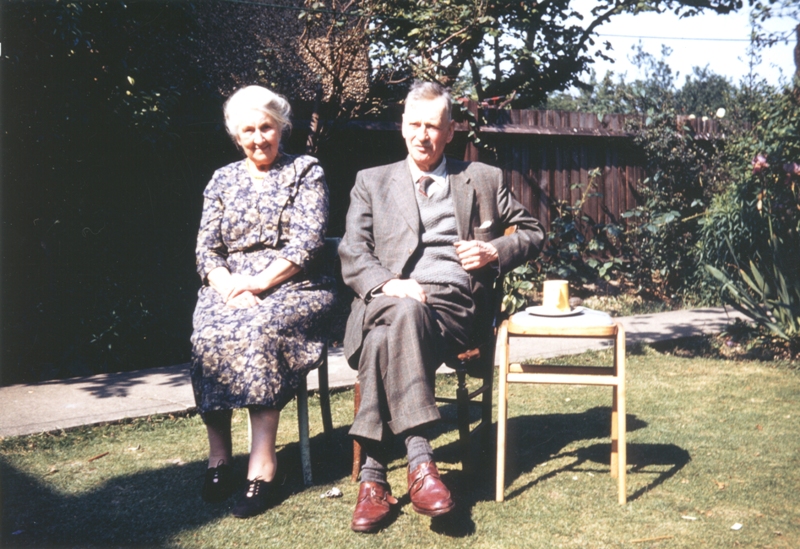 My father, Bernard Brookes, was born on 16th January 1893. On leaving school he became a bank clerk in the City of London and was enjoying a cycling holiday when war was declared in August 1914. Immediately, he enlisted in the Queens' Westminster Rifles and sold his bicycle to the army. After basic training, he was selected to be a signaller.

A Signaller on the Western Front -1914

My father arrived in France on 1st November 1914 and became part of the British Expeditionary Force - 'the Old Contemptibles'. Signallers had certain privileges, denied to infantrymen, because the instruments they used had to be kept dry. For this reason they had the best dug-outs and were not involved in guard duty or much digging.

However, they still endured the mud and hardships and engaged in battle. Frequently signallers went 'over the top' to repair the wires or deliver messages verbally all along the front line. My father was responsible for map reading and leading his section.

On Christmas Day 1914, warfare was suspended. In a letter of three instalments he told his mother that he went to Mass and then he and his comrades fraternised and exchanged souvenirs with the Germans. They visited German trenches, shook hands and shared their food. He collected names and addresses of those whom he met, intending to communicate with them after the war. Perhaps they were killed, as he never had a reply from them.

Life in the Trenches

Men in the trenches got to know each other well and it must have been harrowing for them to see their comrades fall in battle. In one battle about 1,000 men took part and 693 were killed. As my father wrote in his diary, 'It would make for depressing reading to dwell on such fatalities', so instead he recalled many humorous incidents. Sometimes the men added to their diet of 'bully' and spuds with food they 'found'.

Once he 'found a chicken which was anxiously looking for a home, and after mercifully wringing its neck, sat in a shell hole nearby and commenced the very trying occupation of plucking its feathers'. In nearby fields they 'found' peas which they stuffed into their pockets, and with light hearts and under cover of darkness, retraced their steps where they displayed their trophies to the rest of the section.

On another occasion he and a companion climbed a shelled factory chimney. His pal went first showering my father with soot and through a hole near the top they were able to watch the Germans behind their lines. Then they were spotted and had to make a hasty retreat. The Germans wasted a lot of shells on the chimney during the next few days thinking it was a British lookout post.

Religion at the Front

My father would cycle to Mass every Sunday if at all possible. He was particularly struck by the frequency with which roadside crucifixes were left intact and wrote, 'I have since seen several cases of wholesale damage within a few feet of a crucifix, which however had not been touched'. He saw 'a crucifix about 10 feet long by some 6 feet wide, and the wall behind this crucifix was absolutely undamaged, although the wall on the other side of the church as well as the entire roof, was razed to the ground'. In a cemetery, graves had been opened by shellfire, and bones, coffins and tombstones were smashed but tombstones made in the form of a crucifix, although damaged by shrapnel, remained intact. He noted that at Ypres a large crucifix stood over the cathedral that had been almost totally destroyed. A fellow-signaller, a man of no religion, "remarked on the wonderful preservation of the crucifix and mentioned to me, that although he had not been to church for many years beyond attending church parades, "there must be something in it"

and we enjoyed, on our way back, quite an interesting religious talk and it is very likely that good may result to both of us by what we saw this evening. One realised at this time how true is the expression "God's ways are not as our ways".

In August 1915 Bernard was in the line at Sanctuary Wood. Bombardment was heavy, communication wires had been cut and he was ordered to deliver a message. Two other signallers had been killed, trying to deliver that important message earlier in the day but as Bernard had successfully delivered two other messages earlier that morning, and 'knew the way', he had to go 'over the top' a third time. The Germans were firing a 17inch gun. British artillery tried to silence it but failed and so it kept firing systematically the whole day, ploughing up trenches and shaking the earth. The shells could be heard coming from a long distance away, its roar gradually growing more intense as it approached the trenches, and then dirt, men and wood were flung up into the air. The gun was still firing when Bernard started out with his message, so he dropped down into the communication trench nearby, filled with water and dead men, treading on everything that came in his way. In the trench, lay men of the King's Royal Rifle Corps who had been caught by liquid fire a few days previously: the three letters on their epaulets were forever engraved on his mind. He was soaked and covered in mud and found it impossible to continue along the trench. He climbed out and with his rifle smothered in mud and bayonet fixed continued with the message. A shell burst overhead and threw him into a crater. Some men in a nearby British trench spotted him and ran to give him a hand. He delivered the message but on the return journey another shell burst nearby and he remembered no more. He was taken out of the trenches semi-conscious and unable to speak and was transferred to Blighty.

Bernard was taken to StAnselm's Military Hospital in Walmer. In October he considered himself fit for duty but was told he could not return to front line duty. He immediately volunteered for Home Service and served as a medical orderly at Epsom Military Convalescent Hospital, Epsom, for the rest of the war. He had been promoted Corporal in 1916 and subsequently became Company Quartermaster Sergeant (1917) and Regimental Quartermaster Sergeant (1917). He also edited the hospital magazine called The Monthly Tonic. Bernard was demobbed in June 1919.

After the war he joined the Catenian Association as a member of Croydon Circle and served as Secretary for a number of years. He never regretted joining the army and in World War II served with the Home Guard.

My father's war diary has been published as A Signaller's War and is available on Amazon as paperback, Kindle and eBook versions. See www.ASignallersWar.co.uk for more information. All profits go to the Royal British Legion for disabled ex-servicemen.